We’re pleased to have a guest writer today! The following blog post comes from Ronnie Walsh, who’s been volunteering at the Leeds office of the West Yorkshire Archive Service since 2018. Ronnie has been painstakingly indexing Registers of Cases created by eminent Leeds Surgeons to reveal the names, occupations and ailments of the patients contained within their pages.

There are over 200 Registers of Cases in the Leeds General Infirmary collection, covering the 19th and 20th centuries (reference WYL2295)

My name is Ronnie Walsh and I volunteer with the West Yorkshire Archive Service. But for the current pandemic, I would have delivered a talk to you good people about the project I am currently working on.

I am currently involved with indexing the Registers of Cases from The Leeds General Infirmary, for patients treated there between 1880-1918. This project holds great personal interest for me as my day job is actually working as a receptionist in the Accident and Emergency Department at Leeds General Infirmary. On a daily basis I get to walk in the corridors and up/down the steps in the original Gilbert Scott Building which was opened in 1868. After having worked on the Ledgers and going into work, I feel like I am walking in history and it is a privilege for which I will be forever grateful for having.

At the outset of this project, the West Yorkshire Archive Service had an inkling that there were some fascinating stories and people just waiting to be uncovered on the pages. However, what has been uncovered to date and for which the surface has really only been scratched – well, we could not have hoped for more!

The Ledgers have provided a number of fascinating aspects of life in a Victorian Hospital.
• People travelled from all over the north of England to be treated at The Infirmary. Places such as The Lake District, Grimsby and Lancaster are addresses provided by patients.
• It did not matter what your place in society was when it came to being treated at The Infirmary. People with no occupation and living in squalor where treated with the same care as the well heeled. Judging by the dates of admission to the hospital and subsequent discharge home – treatment took as long as it took and the patient was only allowed home when it was deemed appropriate.
• In so far as diet was concerned, patients were treated really well. There are entries in the Ledgers relating to patients being given champagne, port, brandy and ale. Also, the food was of a good standard and always fish on a Friday!
• When I have looked at the plans of The Infirmary, I found that it had two wine cellars and its own bakery and with good reason when you consider the diet of the patients.

I have unearthed some fascinating characters/stories of people who were treated at The Infirmary back in the day. I thought I would highlight to you one stand out individual from back in the day who was treated there.

Charles Burley Ward was treated at The Infirmary 16th March-1st April 1901 and as you can see from his medical record that his occupation is ‘soldier’.

A particular date of Tuesday 26th June 1900, along with a place called Kroonstaad (South Africa) was mentioned on the record. I have found that whenever a specific date is mentioned, then it is for a reason. It is as though the Ledger is encouraging me to undertake further research, which is what I did with Charles Ward.

I managed to find out that Charles Ward was a Victoria Cross winner and the date/place was the action for which he won it. Not only was he a VC winner, he was the last person to be personally awarded the medal by Queen Victoria as she passed away a mere five weeks after the ceremony. There were five medals awarded on the day and these were presented in order of rank. With Charles being a Private, he was last in line to receive his medal, as it turned out to his was to be the most significant of them all in that regard.

As a result of his injuries, he was repatriated home and treated at The Infirmary. The person who treated him was Berkeley Moynihan, one of the most prominent consultants in the country at the time. What is fascinating about this is that Berkeley Moynihan’s father (Andrew Moynihan) was also a Victoria Cross winner. I would have loved to have been a fly on the wall when Berkeley and Charles met, what a conversation they must have had. 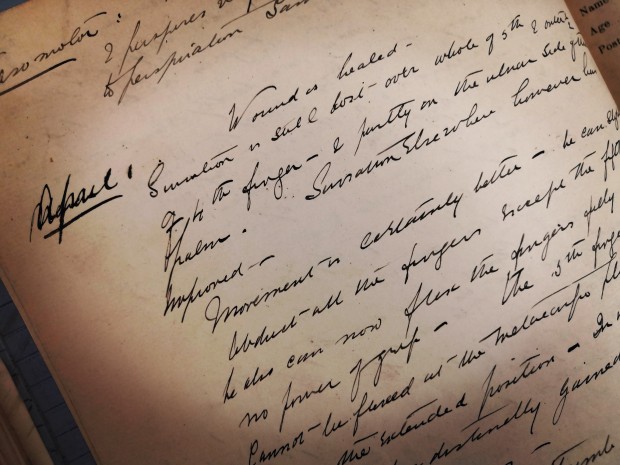 The story of Charles is a fascinating one and I would encourage you to research him. There is even a silent film of him being interviewed upon his return to Leeds and the link for this is below.

I really hope that you have found my blog both an interesting and enjoyable read. This is something which I have never done before and I would be so pleased to receive any feedback from you.

I have a Facebook page, WYA History Blog and on there I look to post anything I come across from my volunteering which I feel people would find of interest. Please feel free to join my page, you are more than welcome to do so.

For more information on the Registers of Cases (collection reference WYL2295) please contact the Leeds team at leeds@wyjs.org.uk.  The indexes created by Ronnie will soon be available on our online catalogue.

You can read more blog posts about the Leeds General Infirmary here https://wyascatablogue.wordpress.com/tag/hospital-records/