One of the more unique items held by the West Yorkshire Archive Service consists of a personalised exercise system developed by the Mighty Apollon, a strongman who lived and worked in Wakefield. Otherwise known as John Crossland Tolson, he took his stage name from his own hero, Louis Uni, who was a French former strongman also known as the Mighty Apollon.

The exercise system consists of a number of interesting items. There are four pamphlets which provide advice for fitness and well-being, ranging from getting enough sleep and fresh air, to stating that “over-eating aggravates the condition of thinness.” Apollon also believed that “bad habits” were the most common downfall of men and that “it does not matter what kind of habit is involved, late nights, alcoholic indulgence, over smoking or any habit of self-abuse, any or all can and will bring on Neurasthenia”. Neurasthenia is a medical condition which is characterised by fatigue, headache and irritability, and associated with emotional disturbance. 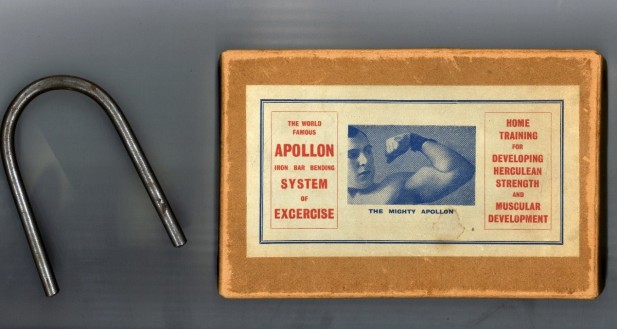 The collection also includes a wall chart, a money back guarantee, photographs and a bent iron bar – the system was obviously well used! Amongst the bundle of items are two personalised letters to J. A. Adams (dated 28 October 1948), a ‘pupil’ seeking advice about fitness.

Tolson was born in Ossett in 1903 to parents Richard and Maria. His baptism register entry (WDP7/1/1/1) shows that he was christened at St Mary’s church in Gawthorpe.
He began training regularly at the age of 17 after seeing a strongman act at a traveling circus. After discovering his talent for bending iron bars he entered many “bending events”.

Some of his famous records include pinch lifting a 65 lbs lead block (just using finger and thumb), supporting twenty men on his chest with a bridge, teeth lifting, bending 4-six inch nails together and walking around a gym while carrying eight men on a special bar. In 1927, with a bodyweight of only 185lbs, he became one of the first men to deadlift 550lb weights. Tolson retired from performing in public as the Mighty Apollon in the 1930s but went on to publish a variety of books, as well as begin his business as a mail-order fitness guru.

One of his books, called “Mighty Strength – the Apollon Way”, explained his inspirations and techniques. The contents page reveals some of the wonderful chapter headings; “You can have Mighty Muscles”, “From Weakling, to Strongman” and “The Strongest Boy on Earth!”

The 1939 England and Wales Register shows that by this time he was living in Dewsbury with his wife Alma. His occupation is delightfully listed as a ‘physical culture expert’. He continued to sell mail-order fitness kits at least into the 1950s and the system would evolve over time. He began sending out a range of increasingly larger iron bars to ‘pupils’ who had signed up for his course.

In 2018, during our exhibition on the 250th Anniversary of the circus, we were delighted to receive a visit from Tolson’s niece, who remembered her uncle very well. She was amazed to see that we had one of his mail-order kits and spent a while examining the photographs and other items. 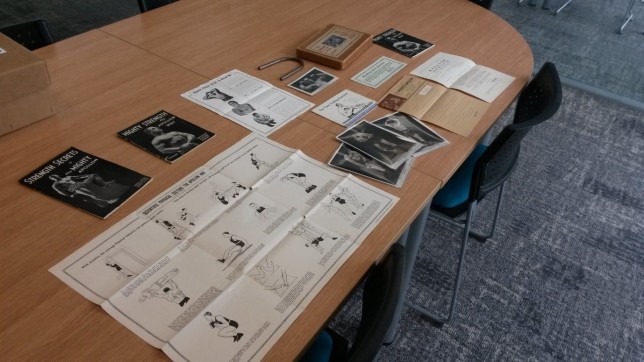 If you would like to explore more of our local history records then you can conduct searches on our online catalogue at the following address: https://www.catalogue.wyjs.org.uk/calmview/